Halloween has come and gone...unfortunately...

I had co~hosted a lovely Halloween meet~up with my bestie ,SweetOkashi, and had a lovely eve out with our local community in a victorian style park. The day was filled with fabulous treats and sweets with spooky themed games and dishes. 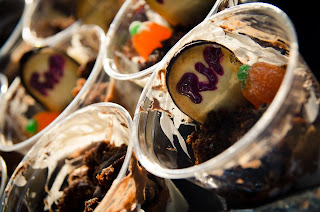 One of my favorite treats were the graveyard cups made with homemade death~by~chocolate and a milano cookie(I know what your thinking) that said RIP on them. They were so delicious and cute! We made enough for a few of us to take some home, although we ate most of them.

I had made pumpkin and mummy cake pops and pumpkin faced tea sandwiches...but the sandwiches were woefully forgotten on my kitchen table as we hustled out the door with all of the party favors and decorations that needed to be set up. Luckily, we had enough food to go around and our guests were quite happy with our spread and thought we put into our planning. 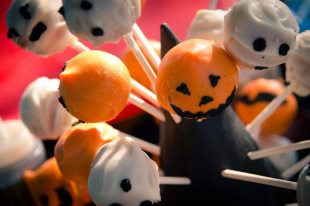 Halloween picnic blankets, a painted pumpkin (dubbed pumpkin~chan), and a witch's hat cake pop stand were only some of the details we had gone through for our decorations and they were so much fun to make and prep.

We told scary stories while we sat and had our picnic, which we had prepped a few spooky local legends for the occasion. I think everyone really enjoyed them. And when we were finished with that we had everyone try to guess the weight of Pumpkin~chan, which everyone came up with some pretty hilarious numbers. ^_^ 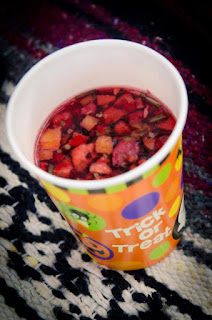 We also had a theme~lolita contest, where the best themed outfit would be chosen out of everyone. We had a Little Red sporting a red cape and the Btssb Red Riding Hood jsk, some cute candy corn appliqued skirts and jsks, and more. Everyone was really cute!

The winners of our guessing contest and theme contests both received a little prize in a coffin shapped box, which SweetOkashi painted and decorated. 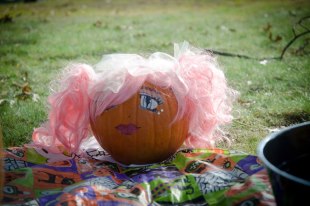 After a few games, we decided to clean up since it was starting to get dark. The day, which had been lovely and had stayed at a nice warm temperature, had begun to let a slight chill set in the air signaling the end of our picnic. As we cleaned and packed up, I told one more story as the last rays of sun were blinking out and gave way to dusk.

I didn't get to write about this sooner, I wish I had and, to be honest, I was going to write about some Thanksgiving recipes I had done and this poured out instead, but it feels good to have done so.

On this lovely night, pick up a cup of hot tea and enjoy what the night brings.

Posted by Madeline Hatter at 5:57 PM

Email ThisBlogThis!Share to TwitterShare to FacebookShare to Pinterest
Labels: Frills and Chills