I apologise for how long this one is I was suddenly inspired to read into things, that I remembered by chance because of this prompt, and run away on a mystical journey with a historical fiction... 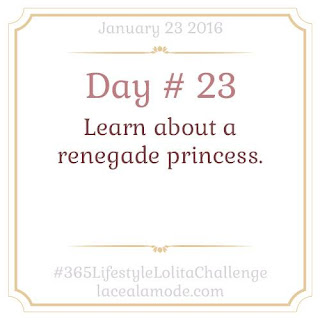 Renegade princesses happen to be one of my favorite things to read and research about, so much so that I choose two the last time I did this prompt, Princess Awilda and Princess Pinyang both had incredible stories. I didn't want to repeat with the same women so I scored through to find one new one for this topic. 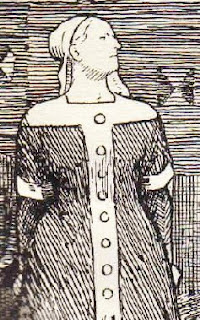 While prepping for renegade princess research I recalled a story about a princess who went against the grain of the Christian kingdom she was marrying into and publicly kept hold of her faith to the Norse gods, it was a vague memory that I had to dig for. It was the story of Sigrid Sorrada, or Sigrid the Haughty, a princess who’s beauty and mind were both bewitching and beguiling, which did me in and caught my eye. She was said to be so beautiful that at the death of her first husband, Erik the Victorious, she ensured that she would not be pestered by unwanted suitors vying for her attention by setting them at ease with a feast and, once they fell asleep, setting the hall on fire and slaying any of the suitors who attempted to escape.

It was also true that she held to her beliefs and would not stand to have her ways offended or asked to convert. One man, Olaf Tryggvasen, King of Norway, who sought her hand insulted her after her refusal, both in marriage and in conversion, and then slapped her with a glove, Sigrid promised he would regret his act against her; according to history, he did live to regret in a massive battle at sea that she was apparently responsible for gathering the army to face him. Let’s just say Olaf did have a very important meet and greet with the fates and water sprites. 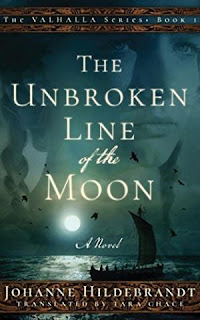 The book in question is The Unbroken Line of the Moon by Johanne Hildebrandt in case you are curious, it quickly wrapping me into the folds of Nordic history and myth with it's story telling, with a warning that it can be accurate in it's telling of pillaging and everything that it entails (consider this a warning of it's graphic content). I pulled out the book last night and I meant to only glance over and ended up devouring half. The book seems to only touch upon basic facts of Sigrid’s life so far, such as her first marriage being to Erik the Victorious and then Sweyn Forkbeard, and her the saying that she was “the mother of Kings” and her love for her religion.

The book is of the historical fiction variety, the info I’ve imparted is as good as legend, there isn’t much that remains of the truth of Sigrid the Haughty. The information that we do have, though intriguing and possible, has said to probably be several women with similar names, unfortunately. The one thing is that the names spread through this time period and area are all of similar sounds and spelling, though that’s not much to go on. The bits I’ve imparted here are the pieces that are the closest related to the legend of Sigrid that I can find. 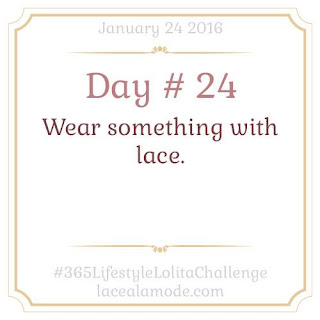 Today was certainly an interesting day of lace and adventure and misadventures involving two military bases and a lot of lace. I ended up with the car down in DC, something I absolutely dread because the gps gets easily confused due to buildings and so many forks in the road, and decided to throw caution to the wind! I google house museums in the area and discovered the Robert E. Lee house museum was 10 minutes from the overlook I parked in my sudden bout of insanity. It's actually his wife's family home that he barely lived in and it's in Arlington cemetery...which happens to be somehow accessible via two military bases (thank you gps for the weirdest most guarded run around). Let's just say this civilian caused a bit of confusion for several MPs.

This is what I wore: 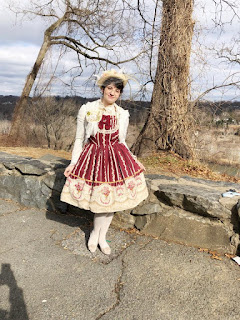 I did say I wore lace, I went with this IW jsk and bolero because of all it's lovely lace trim, the jsk even has lace printed on the hem. 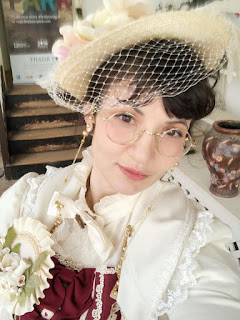 This will certainly be a day for the memory books... 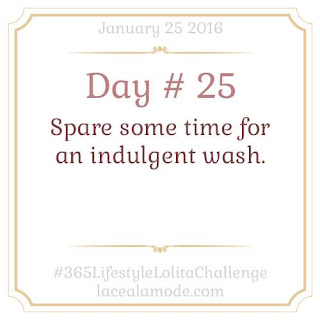 Bath time is probably my most favorite indulgent past time. I like to scrub and wash away all of the grossness of the day then prep the tub for a soak, melting away any frustrations and relax with a book. When deciding what to add I found a little pumpkin bath bomb I forgot I had tucked away for a rainy day. It's vanilla and cinnamon with a touch of berry that blended well together, to this I did add some lavender bubble bath mix and a handful of roses, all together it was wonderful! 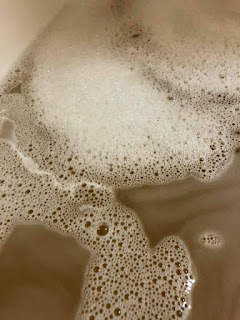 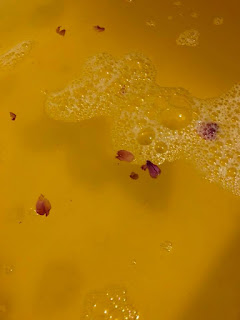 Now that I've drawn myself a bath, it's time to soak and relax for the rest of the evening and hopefully finish that second half of The Unbroken Line of the Moon.

Posted by Madeline Hatter at 9:02 PM

Email ThisBlogThis!Share to TwitterShare to FacebookShare to Pinterest
Labels: 365 Lifestyle Lolita Challenge, 365LLC, A Few Of My Favorite Things