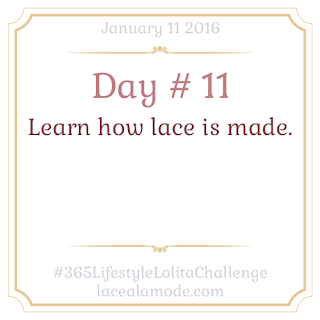 I really enjoyed learning a bit about lace last time I did this challenge and so this year I decided my next project would be to really try out tatting. I've been wanting to try making this style of trim for some of my pieces so I figured I'd share a tutorial that could help me. 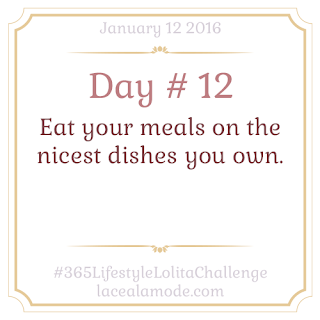 The only time I really ever get to make dishes and plate them the way I want is around lunch or tea time. I'm not usually big on lunch and don't usually do much more then fruits during the morning because I just don't really take that time, so usually during tea I like to plate my food and enjoy it that way. I just got the cocktail fork so I was excited to use it for the little berries and since I've made a runner for my sewing table I decided to take advantage of the look of it to add to the ambience. 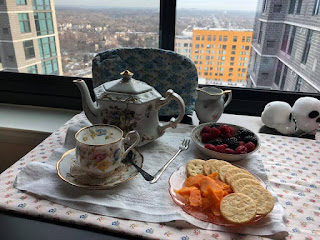 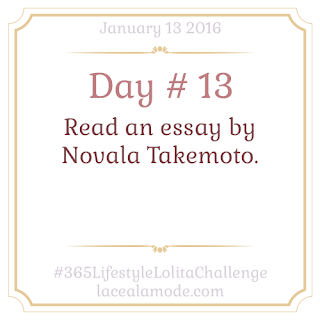 Last time I did this one I went with The Illusion Of  Flowering Lady, which I really enjoyed and went back to before doing this challenge, so for this particular post I tried to dig around for another I hadn't read before.

Soleilnuit by Takemoto Novala - The Planetarium and Imitation Girls
I visited the Astronomy Science Center in Akashi. I took the Osaka Express and switched trains at Sanyou. The train made clacking noises and swayed back and forth stopping at every station, going alongside the ocean scenery. I got off at a tiny station called Harumaruzen, and could see the shape of the astronomy tower, which resembled a large clock tower.
At 135 degrees east longitude, the meridian there controls Japan's time zones and also has a star museum. I saw a crystal quartz clock which was right out of a Tezuka Osamu-style future, and an exhibit where you can personally experience Kepler's Law of Planetary Motion using a chip, and took a tour of the models while waiting for the planetarium show. I figured the planetarium's dome must be larger than the rest of the exhibits. The stars were projected onto the ceiling, and it was the real sky, but even realer than real, since it was deeper and more vast. It was a million light years away, and I was attacked by this feeling of desolateness. The Akashi horizon was broken up into rows of silhouettes, and the infiniteness of the night sky made my chest start to hurt. I glanced down and noticed the shape of the projector, which resembled a giant ant. It was at this moment I began to think, "Huh. At this planetarium, the stars that I'm looking at right now aren't real." Usually, I don't really look at the night sky. But the projected starry sky at the planetarium pulled at my heart more than the actual night sky ever had.
I prefer a round piece of glass to a diamond, and a robot more than an actual human. I like Bernard Faucon's mannequin photographs, Oobayashi Nobuhiko's SFX, and Takaratsuka opera. A young lady's essence is a sort of "imitation," and with this one word I can openly express it. When a "female" replica and a "young boy" replica exist simultaneously, it is called a "young girl." A young lady is an imitation of the reality of the world. If you squeeze out all of the artificial cuteness and beauty, you are left with an unbalanced, yet pure, android. The guide's voice informed us that dawn was approaching the planetarium. The starry sky reverted to a white screen; Alice opened her eyes and was forced to part with the vest-wearing rabbits. The clocks which regulate Japan's time at the Astronomy Science Center had second hands that had started to slice away bits of reality.

I really enjoyed this one so much that I had to share it. What's one of your favorite Novala Takemoto essays that you really like?

Posted by Madeline Hatter at 9:10 AM