These have been my adventures from the last few days, I haven't quite figured out exactly how I want to publish these posts so please pardon the strange scheduling of them. I hope you look forward to future ones and if you care to take part in it look up the ones on the facebook page of Lace A La Mode. 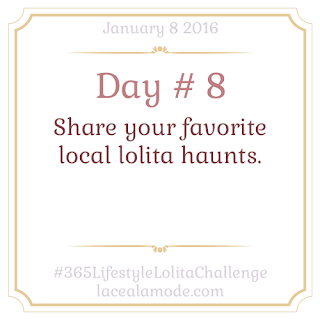 This was serendipitously timed for me as I have been, sadly, stuck within my apartment and haven't been able to go very far because of an old injury that's put me out of commission since it's been acting up. So, I've been in need of an excursion out and about and wanted to head to one of my favorite haunts. 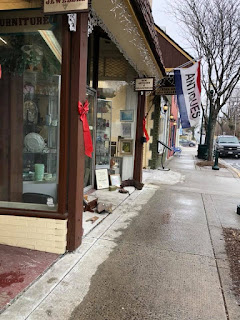 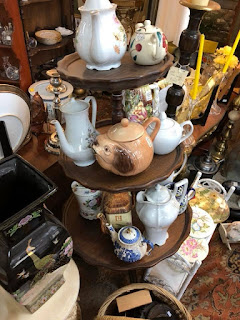 I enjoy traipsing through this antique village that hosts a myriad of different sellers. Some have their own shop while smaller sellers sell through one of the 2 larger buildings. I park at one end of the street and make my way down to the other, visiting each in turn and sometimes pick up a little bit of happiness, greeting each shop owner and having a good chat. 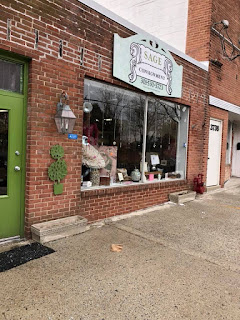 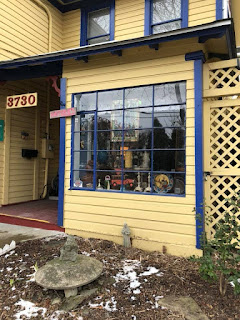 As I usually park at the top of the street, I generally enjoy ending at the little park at the bottom that has a lovely little historic house with a tiny cottage style library at the base of it's little hill. It's very cute and it makes for a nice end to a trip. I definitely have that planned for tomorrow even with the cold. 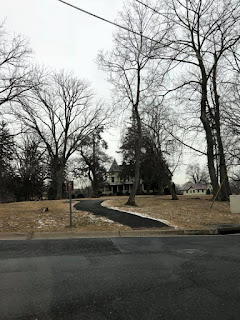 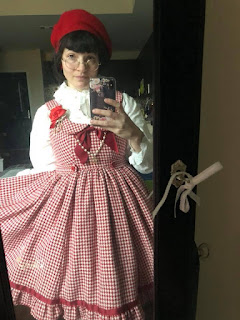 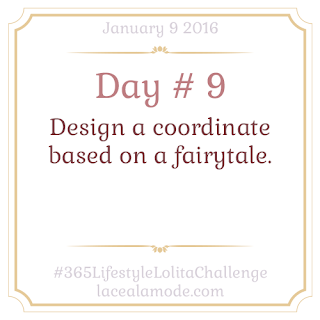 Last time that I did this one I went with The Weird Witch and the Willow~Herb and thoroughly enjoyed playing around with making a coord for it. I like working with the more obscure fairytales, both ones I know and learning new ones. This year, The Seven Wives of Bluebeard is the fairy tale which I decided to go with, I went with the seventh wife taking inspiration from one of the pictures in a book from 1911 that was a compilation of stories like Sleeping Beauty and The Juniper Tree. 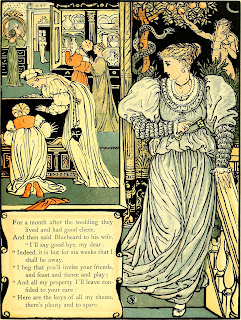 The story goes that the seventh wife was left on her own for a few weeks, she was given a key to all the doors and chests in the manor, the only caveat was she could not enter one forbidden room in the basement. She held a party with her sister and all of their friends but during the party she decided to trek down into the basement because she finally couldn't take it anymore. When she opened the door she was terrified of what she discovered, all of his previous wives, indeed dead, chained to the walls. She dropped the key in a puddle of blood in her terror but could not clean it to hide the fact that she had seen that which she was not supposed to, as it was a magic key. I'll leave the rest to you to either imagine the ending or find it and read it. 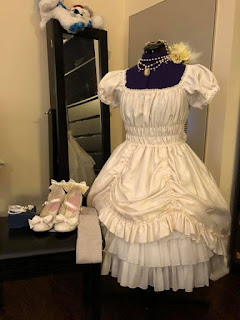 I very nearly pulled out my bridal veil mask for this but after seeing the little bit of artwork I did something a little different. I went with a floral hair pin and a simple headchain to mimic the pearls that are sometimes seen wrapped in the hair of some regency era hairstyles. The key bracelet is actually something I had gotten from the Charming Wonderland meet that I went to and saw it by chance while pulling things from my jewelry drawer. 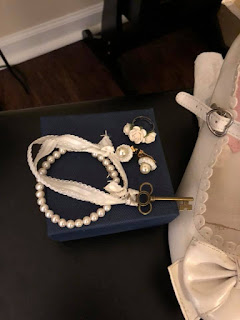 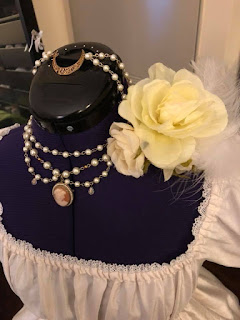 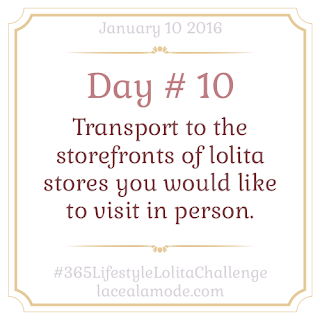 I can't tell you how much I'm laughing at this one. I had decided to attempt a photoshop hack job for a quick giggle and instead I'm rolling at how dumb I look, but overall pleased at how well I did without a pen stylus for it. I also didn't take a pic of myself yesterday when I had actually put on make up so instead you get the derp bare face one I took of what I wore for Day 8. 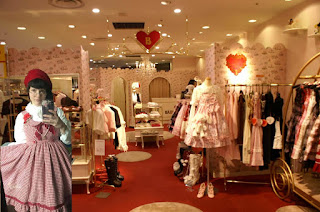 This is Shinjuku's Marui 0101's Btssb's store. I had visited them a few years ago now but I had only gone as far as being blinded by the Aatp shop in front of the escalators. At that time Night Fairy Fantasia was being released and all it took was to have the series set in front of me to loose sight of everything else on that floor. So when I get back to Japan I'd actually like to investigate more before loosing my marbles and wallet.

So that's it for the last 3 days, I've done a little dreaming of fairytales, a decent amount of much needed shopping at a favorite local haunt, and transported myself to a store I really want to visit. I'm going to sign off here and start the rest of my day (Wardrobe post month and all that) and I hope your day is going swimmingly so far.

So grab yourself a clean cup for yourself as it's time to grab a pot and brew a new leaf to warm me as well.
Cheers XO

Posted by Madeline Hatter at 11:05 AM

Email ThisBlogThis!Share to TwitterShare to FacebookShare to Pinterest
Labels: 365 Lifestyle Lolita Challenge, 365LLC, A Few Of My Favorite Things