There was a flutter of ruffles as she ran across the moonlit garden to meet the lord of the manor, dressed in their finest, with heavy brocades and furs of the hell beasts that had been slain for the winter. She hadn’t cared how dangerous they were, nor that the flora could ensnare her lest she were not vigilante, for she believed her heart and soul were already stolen from her, what good was a body without it’s most sacred pieces?

Draped in the finest of lace and ruffles that danced around her knees the way she had danced in the greenhouse with Lord Byleth, too many months past. She could never deny the sway they held over her. Not after they had bestowed her with a locket with their hair braided together. It had turned out to have a protection charm to veil her from danger unbeknownst to Lorelai.

She wore the locket daily and the beads and chain would somehow shimmer and change to become the colors that matched her dress she wore. The little details in gifts from a demon...

On this night her dress sparkled like starlight, something that hardly graced this netherworld though the moon could almost always be counted on. Her petticoat only served to fluff out the fabric to fan about her frame, the ruffles of her skirt swished around her knees. The trim around her bodice only furthered the glow with the pale gold fibers woven into it. It was the same color as the bracelet Lord Byleth had placed about her wrist prior to leaving and it was bedecked with the tiniest pearls Lorelai had ever seen, and having it near her made her feel safe. It was meant to mark her as their’s to other’s of the demon realm. Though she was a human trapped there she was not prey for the taking.

Lorelai finally reached them, her hobnail shoes sunk into the fresh mud from the rainfall the night before as she stood before Lord Byleth. And though the sun was not bright it still obscured her sight. She could only lift her head which made her bonnet tilt backwards and nearly fall to the earth behind her had Lord Byleth not caught it.

Her lungs seized up with barely a touch and as one set of fingers righted the bonnet while another crept into her the locks of her hair, Lorelai was certain her entire being was frozen.

“It’s good to see there are some things that do not change...”

And with a smile from her lord the lost little mortal felt her world return again.


And that’s it for my love story.

There are so many fun things to do at meets that hosts carefully find or creates for all it's lovely attendees, it's always fun to learn and craft more. My previous post I had looked up "Are you there, Moriarty?" which I still haven't found or held a meet to play it but I would like to. This time around I've searched out one game that could be EASILY geared towards Lolita and be done without much to prepare except with a forewarning for guests to be prepared to remove an accessory and goof off (as if that's difficult for us to do!).

The game I picked out is called Forfeits, traditionally a Christmas game, and would best be played in the comfort of a private space so people don't have to worry about bumping into people, ridiculous physical behavior is encouraged. The way the game is played requires one person to be the auctioneer or judge and to send that person into another room, those left have to lend an article to the pool before inviting the auctioneer back in.

After they've been invited back in the auctioneer selects an item in the pool of things and has to describe it however they see fit - the sillier the better in this case - and then put the item up for "auction." In order to win ones garment back that person needs to out goof the others trying to "win" the item back, however there is a caveat to this. If the owner can not be correctly identified or does not perform the best the item is forfeited until the end of that game's round.

In the Victorian era there was also a penalty inflicted on the owner, small funny ones that wouldn't harm anyone involved. Usually something would be to dance to music in an incorrect fashion or to make the article owner stand on a chair and be posed in whatever fashion the other participants put them in until the end of the next auction, silly things like that. Another punishment would be to flatter another participant in any manner but they aren't allowed to say words that have a certain letter in, like "L" for instance.

I think this game could be HILARIOUS in a group of frilly people, maybe needing at the least 4 people and the most 8 unless choosing more than 1 to be the auctioneer. I would definitely like to implement this game at a meet at some point in the future and think with all of the neat things in Lolita fashion it can produce many ridiculously funny descriptions, as well as incite "most embarrassing behavior." 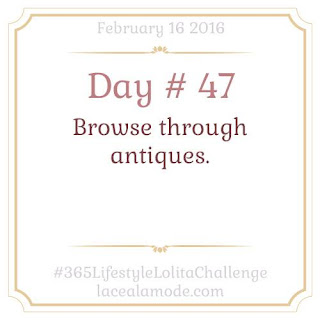 I am a glutton for punishment and totally want all the antique things!!! I did go antiquing not too long ago so here are pictures from that little romp through but today I will torture myself with online auctions for antique goodies. I could browse all day and only learn this is always a mistake because I want them all. Here are some of my finds:

I am a sucker for Limoges and nearly bid on that last one, the cameo wasn’t terribly priced either.

I see a cute one I can post on that’s well done and cute, so done and done!


This was a lot I apologize it’s been a hectic week with an assundry of things going on (come see my line walk today at Katsucon!!!! Weeeeee!!!) so I’m all over the place.