Little Halloween Tea Time For Me!

Late to post this but I wanted to share my little Halloween outing that had me running all over the city, and into the next state over. There is sadly not very much to do or take in it seems so I endeavored to do something on my own. I also managed to finish both the #31daysofspookylolitas coordinates I had been carefully working on and the #Frilloween2018 challenge that was created by @thedevilscreampuff that had all sorts of fun prompts. With all that, the Frills & Chills meet, and doing the Season of the Witch Bonnet event I had my October full (I am still going and now sick again but I must plow on!) and wasn't ready to let the lack of festivities around the area get me down. 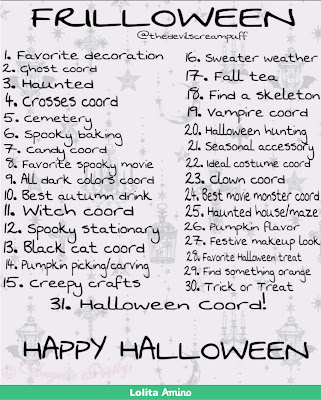 First and foremost, I threw myself out the door and picked up two new teacups, one that I had to pick up and the other I thought would be nice as I realized I had no orange tea cups. They weren't both from my usual dealer and one was a steal in the world of fortune teller teacups that you wouldn't fathom. Shortly after that I actually went down into the city and walked around to enjoy any decorations that may be hung up (which sadly there was not much). 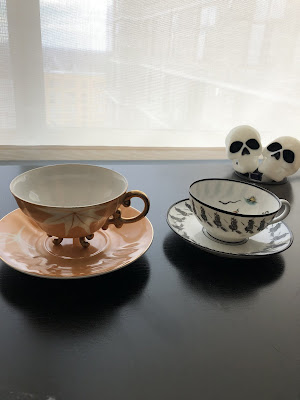 I actually hit up the Laduree for the very first time in my life and picked out the famous ispahan to go, as I was truly playing everything by ear, and then traveled to~and~fro until I actually bumped around in one of the antique stores that I enjoy browsing through and had a conversation about tea and tea readings. The seller had been fascinated with the ones I had already procured (I have two the new Pettersyn & co one and a Paragon) and we spoke about how the times have changed and no one really did tasseography anymore. We also discussed the history of it and the fact that so many cups were out there but so hard to find. It was a great conversation for the day and something I had not expected. 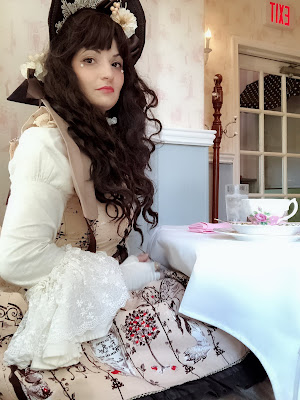 After that I did a little more hoping and went to the cat café down the street just to see what they were up to, yet they were closed. So after watching them in the window sleep and roll about, I changed paths and went to my favorite tea shop in the city. I know that I could have stayed at Laduree and tried theirs but I was dubious when looking at their menu and just truly wanted to try the ispahan first. Luckily, the shop was actually pretty empty and I was given pick of the tables and nestled myself into the large window booth. 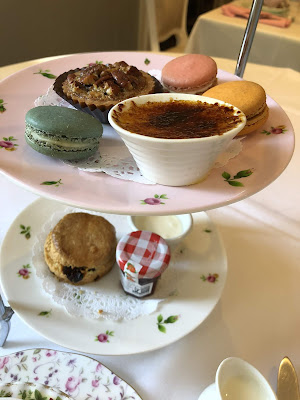 I enjoyed many of my favorites - of course missing a pick of my sandwiches - that included cranberry and white chocolate scones, clotted cream, lavender and rose macarons, and my favorite lavender tea. There was a lot to enjoy and I got to sit and enjoy myself as I wrote while soft classical music played in the background. The only thing I wish I could have had was more Halloween themed things or decorations, to be truthful. 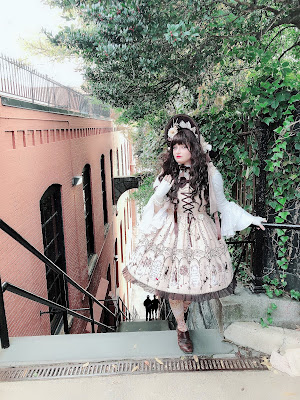 So to make up for what I was lacking, even though I did enjoy displays people set on their houses, I took a walk to the steps where the exorcist was filmed. I always try to make a trip down her if I can, even on normal days through the city. On Halloween though, it seemed as though that's what was in everyone's plans and it was swamped with tourists, not just college students. I was very lucky to get a few pics with the help of someone who had come to check out the stairs. 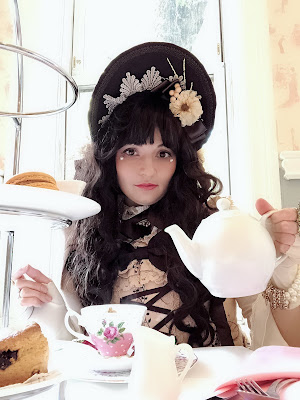 All in all, I was able to enjoy a little slice of happiness and nothingness for a day which I have not been able to do very often for a while. I wore one of my dream dresses, Black Cat, Witch, and the Apple Tree jsk, from Alice and the Pirates and there were actually a lot of people who knew the brand and prompted fun discussions about the fashion. (Also, someone's mother is the bee's knees and so super sweet!) Next year I think I'll plan out something similar but maybe I'll go to a Halloween haunted house in addition to tea, something spooky for sure. 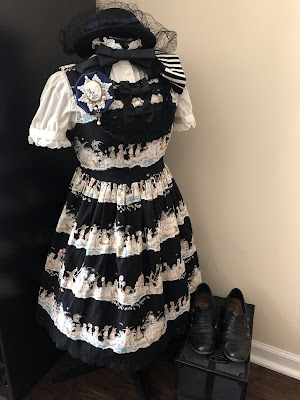 Posted by Madeline Hatter at 10:57 AM