Wigs In My Loli

This post could just add fuel to the fire but it's only my opinion and if you don't agree with it, that's fine. I saw a post on a Lolita confession board a few weeks ago that basically said crazy colored wigs suck and they made the fashion look like more of a costume. I disagree with this.

If you think it's really just a color thing because the colors pink, blue, green, etc are more costumey, think of all the people who don't wear Lolita who have colored hair that are of the vibrant variety. No one looks on them like they are wearing a costume, because they aren't, it's just their hair.

Sure, a wig can be costumish in general, but I think that's really depending on the quality of the wig. I have seen pretty horrendous wigs being used for Loli and it has made me cringe at the sight of a wig of any color that looks like someone bought it from a Halloween store. However, in spite of these missteps, I have seen some fabulous coords with gorgeous multicolored hair that suit the person and coord just fine.

Just be mindful of your coordinate and use your discretion on how it fits your head and if it suits your outfit, don't do it just because you think that's the only way you are a Lolita. From what I've observed within the Lolita community some girls and guys think that wigs are now a must to be a Lolita, particularly newer Lolita. I am a wig person, I don't wear them with all of my Lolita coords but I don't think it is a must, it's just helpful with my difficult hair.

﻿I find it favorable if you have very little hair to work with or you don't want to dye your hair a "normal" color to match your Classic Lolita that you only wear when you are out for a meet~up.
It can be in the reverse too, with a two color split and clip on pig~tails in neon pink and blue, or if you wear a pretty chocolate brown bob, it's your head wear what you want.

Whatever you need to do to make things work for you, you shouldn't be afraid of doing so. Who cares if it's a wig, big deal, just make certain it's a nice wig.

Posted by Madeline Hatter at 8:46 PM No comments: Links to this post

Where I've Dissappeared To

AAAAAAAAAAAAACCCCCCCKKKKK! I haven't posted in what feels like a zillion years!

It's been a while since my last post hasn't it?

This past week was one birthday after another, my niece's was the 6th, mine was the 9th, my brother's was the 12, and my father's was today, the 16th...That's an almost unbelievable party central and yet in a few more weeks one of my sisters and and another brother will be having a birthday. (I guess my parents thought having birthdays all around the same time was a good idea. Saves on time I guess lol) Despite all the partying today was the only day I had any cake at all...O.o Not even a cupcake... 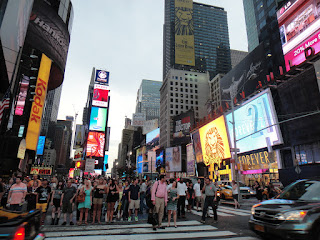 So for my birthday, my boyfriend and I took a huge trip to New York City for the weekend. It was an awesome surprise, although I guessed, I didn't know it would be for 4 days though.

The trip was also for our anniversary, I've been with my boyfriend for 4 years now, so YAY! Awesome trip to NYC.

We went everywhere, saw Peter and The Starcatchers, based on the prequel book of the same title by David Barry and Ridley Pearson. (good book by the way) 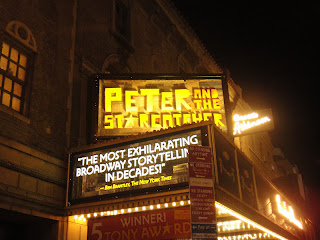 hoooboy...The moment the character Black Stache took the stage...I don't want to give anything away but I took a deep breath, closed my eyes, and thought 'Oh god, I picked the wrong show!'

﻿ I laughed. I thought the show was better than I expected. Really well written, funny and fun, and it had some of those moments when you believed that something was happening that defied all reason. It was magical. 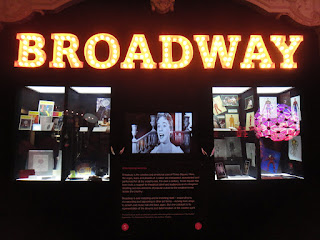 There was no drop in the characters or the scripting, no pregnant pauses where you just wanted a scene to get over with, and the actors were fairly articulate, which was really good. Having done so much in theatre, sometimes, it can be a real killer for watching shows because all I would want to do is get up and be on stage and act and sing and dance with them or I'd spot huge drops in the show and cringe...I may be a theatre snob I guess but I have to say I was impressed and had a great time with a show that I was unfamiliar with. 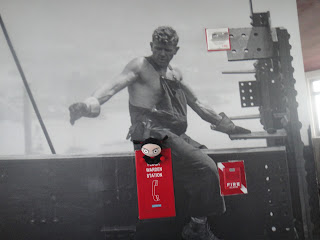 The better part was seeing my boyfriend laugh harder than I've ever seen him laugh before. He is my best critic, completely un~biased, which is what you think would be the opposite but he doesn't know how to pull a punch with his opinions. If he doesn't like it he'll be sure to let you know, so you can see why I panicked about the show, and thought he would think the characters would be obnoxious or stupid, but it turned out to be some of his favorite characters and a really good experience with the show. 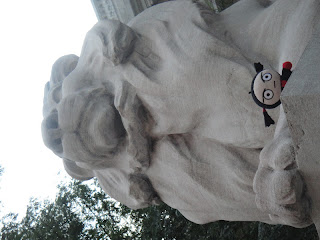 Aside from the show, we stumbled around New York, literally, happening on the New York Public Library (Ghostbusters' theme song playing in head) and took a thousand pictures. I've always wanted to go so I'm very happy to have actually gotten to see it in person. I am not just a Ghostbusters' fan I am a book worm. ^_^


﻿We took a stroll through central park, took tuns, got lost in the subway system several times, and went all the way to the top of the Empire State building. It seems we always get lost successfully and turn out to find something awesome.
Between the food, the sights and the show you would think I'd experience everything I could possibly hope for on this trip, I am definitely lucky, I got way more than I had hoped for.

My next post will be a small snippet on our trip to Tokyo Rebel...stay tuned and enjoy...﻿
Posted by Madeline Hatter at 11:00 AM No comments: Links to this post