As most of you frillies who read this blog know, I love Halloween! It has to be my most favorite holiday of the year and I love finding out all the little historic tidbits about it as well as enjoy the candy filled events that accompany it. This year will be a bit different for me though as I will not be participating in a full night of horror movies and trick~or~treaters.

The reason being is it will be my wedding day.

How this relates to this blog post is surprisingly simple. I will be dressed in mostly brand pieces from Enchantilly and Alice and The Pirates, anything else will be handmade or antique pieces that I've found on my journey through life. I'm very excited about this since it is my wedding and the dress is very special to me and working on all of it has been easy and simply but elegant. My veil will be two layers that I put together or made with pearls and flowers and a mask to add the an elegant Halloween feel and to give a longer look I added a lacey tulle underskirt from Alice and The Pirates.

I'll post pictures after the wedding of what I wear ^_^.

For past Halloween styles I have always gone out and put together something usually witchy and cute. 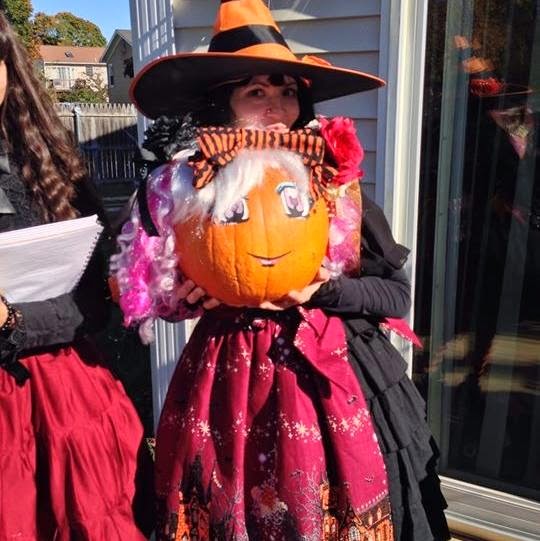 So for all of you frillies who have been keeping up on the Lolita Blog Carnival check out the others who have posted for this topic! If you want to learn more about the LBC or join you can look us up here, but please read the rules prior to asking to join.
Check out these frilly posts though:
✝ Vanilla & Licorice
✝ Whimsical Adventures of Me
✝ The Cute Lifestyle
✝ Hello Batty﻿
Posted by Madeline Hatter at 4:46 PM No comments:

The Things That Go Down At Rufflecon

So let me regale you with tales of Rufflecon, my very first con ever! The whole event was truly marvelous, I had been planning and waiting a whole year for this to come by and it was just amazing from start to finish.
With my V.I.P. ticket I was given first dibs in many things like the marketplace and consignment rooms and a tote bag filled with many goodies with a few really lovely gifts from Enchantilly and Triple Fortune. I also got a complimentary ticket to the high tea which was really lovely and fun, but in all honesty Rufflecon had so much more to give.

﻿
The halls of the Omni hotel where the con took place was jam packed with frills and lovely people. I met so many new faces and roomed with my local comm which was awesome so I got to spend a lot of time with everyone.


It was a lot of work and I was super nervous but the staff, translators, and designers really were helpful and caring and amazing to work with. I know that a lot of stress had to have gone down but everyone was stellar and wonderful to be around and they worked hard. 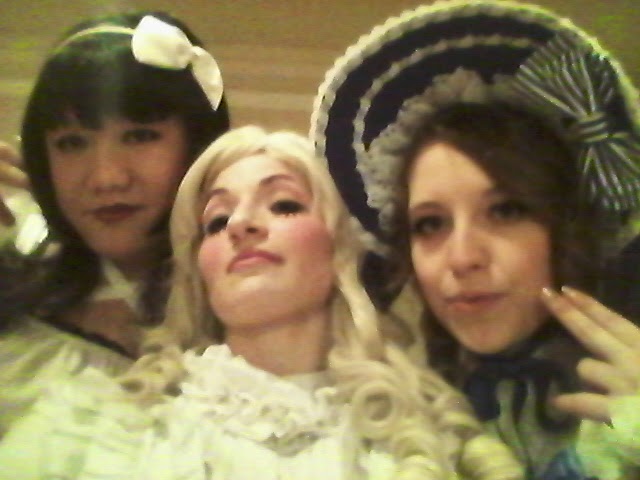 Even though we had been models for only one or two brands people were allowed to mingle within the dressing room. I felt everyone was super friendly and supportive of each other, I took a lot of candid shots in between rehearsals and dressing. 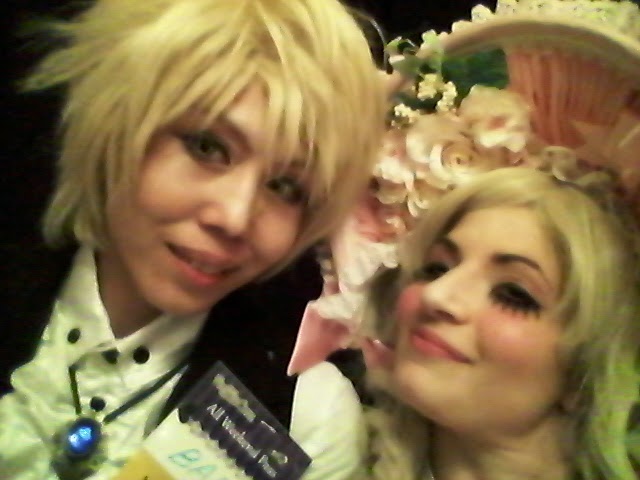 I couldn't resist getting a bunch of selfies with these two.﻿
﻿ 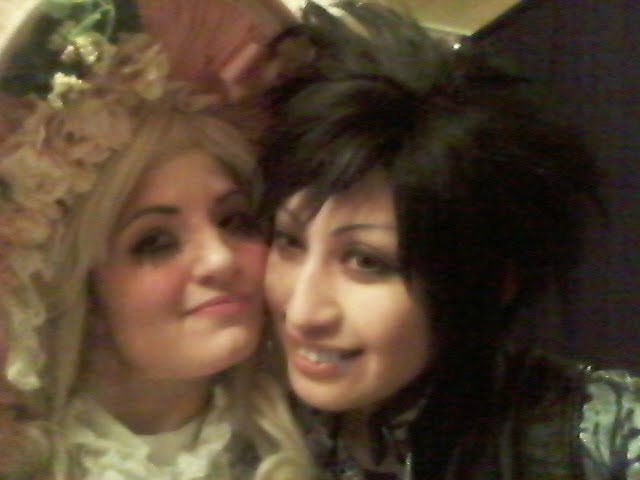 The director and designer of Triple Fortune, Babi-san and Kaie-san, were seriously amazing and it was a great opportunity to get to work with them. I was awed by them and a little intimidated because they were simply so cool, but they were friendly and kind and funny and I feel privileged to have had the chance to model for them.

Aside from the fashion show and chilling with some fabulous people and having many many random dance parties I won a wig from Gothic Lolita Wigs and eyelashes as well which were fabulous and I put on for the masquerade that was later. I also got so many buttons from vendors and a need for a corset from Redfield.
﻿﻿

The variety show was cute and the participants seemed to have quite a deal of fun. The entries were all really impressive and fun and creative and I have the urge to enter the handmade contest next year and the talent portion as well. 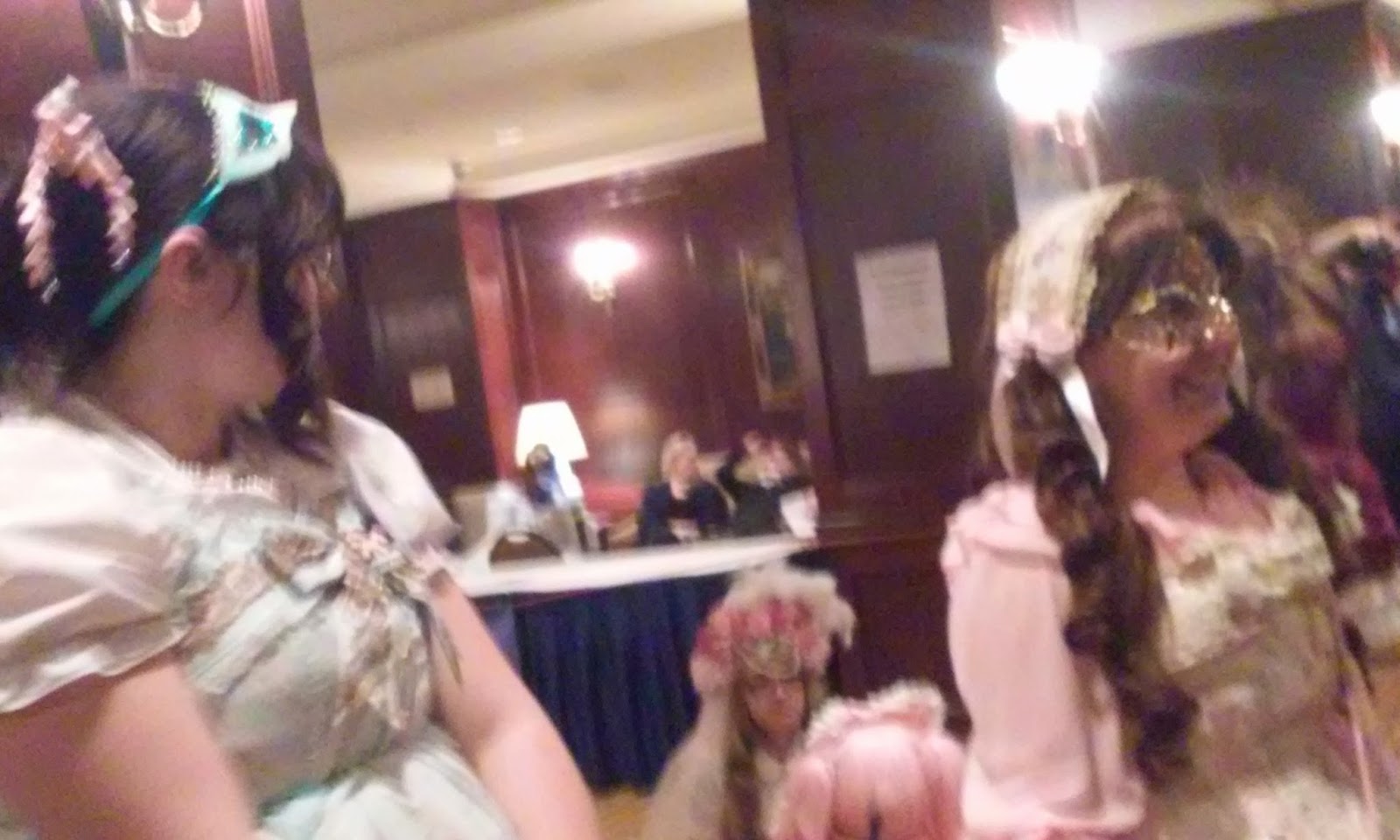 The Masquerade kicked off with Triple Fortune's band called Brilliant Kingdom...I can not tell you how big of a fangirl I had become...I know I'm not the only one either. Fangirl-tendencies aside, they brought an amazing performance to the stage that I thoroughly enjoyed rocking out to. The other groups that played were all lively and fun as well, at one point I joined a group of ladies rocking out and we morphed into a little bit of Victorian styled dancing and then later on after that we all bounced around to Platform One's awesome performance and sang along with Voltaire. 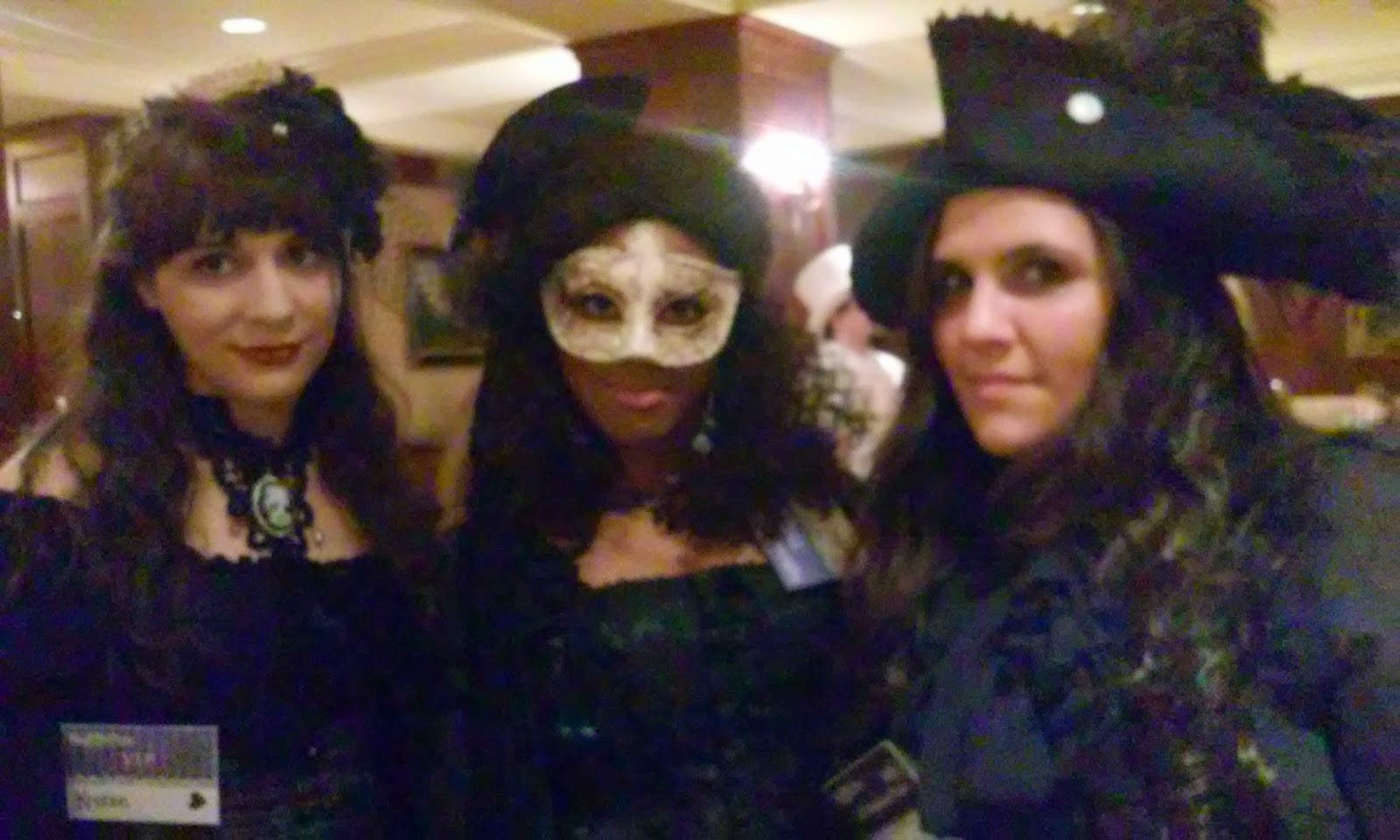 Although, there were other things to be done during the Masquerade, like Jojo poses, we ended up getting roped in to a smashingly good time at a steampirate tea party. I'm going to be honest, I heard tea party and couldn't resist and it was a whole ton of fun brought by The Pirate Crew Of The Dead Rabbit. 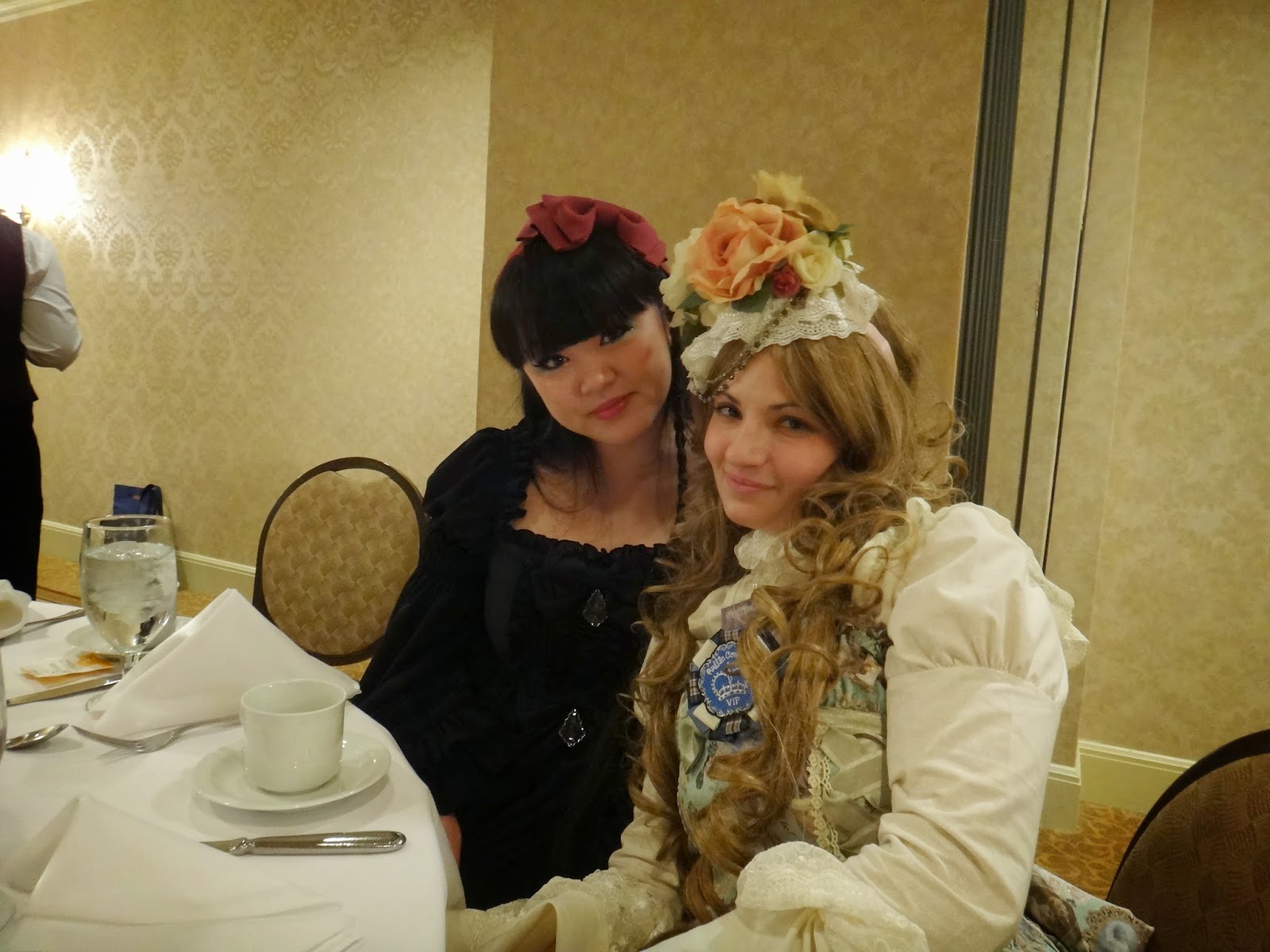 I did manage to make a few purchases, including my wedding dress which I bought from Enchantilly. Fumiko-san was very happy to hear I was going to wear it. She was just so super lovely and cute and genuinely sweet person, I'm very glad to have gotten a chance to meet her. Well, That is all for now frillies, I'm in need of some tea and sewing to get myself out of post-con depression. Yes, I think I got it bad. Yes, I think I may have lost my mind a bit. And yes, I think everyone I met at this con was absolutely super to have gotten a chance to meet. There was too much to be had and I really can't wait till next year, I had a complete blast! 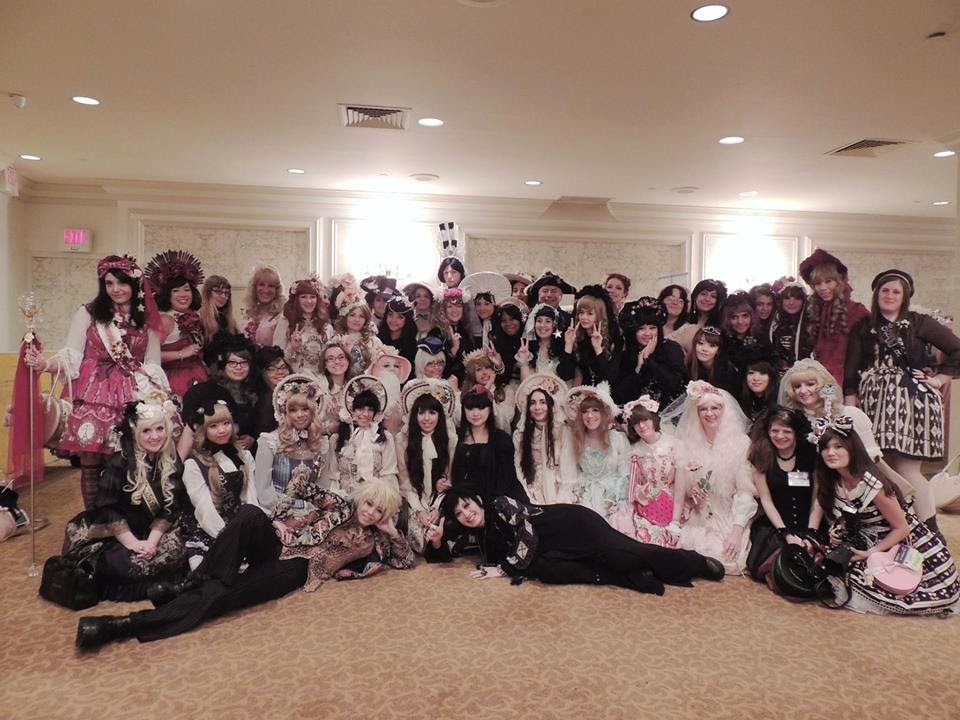 All I know is this evolved very quickly and mysteriously into this. 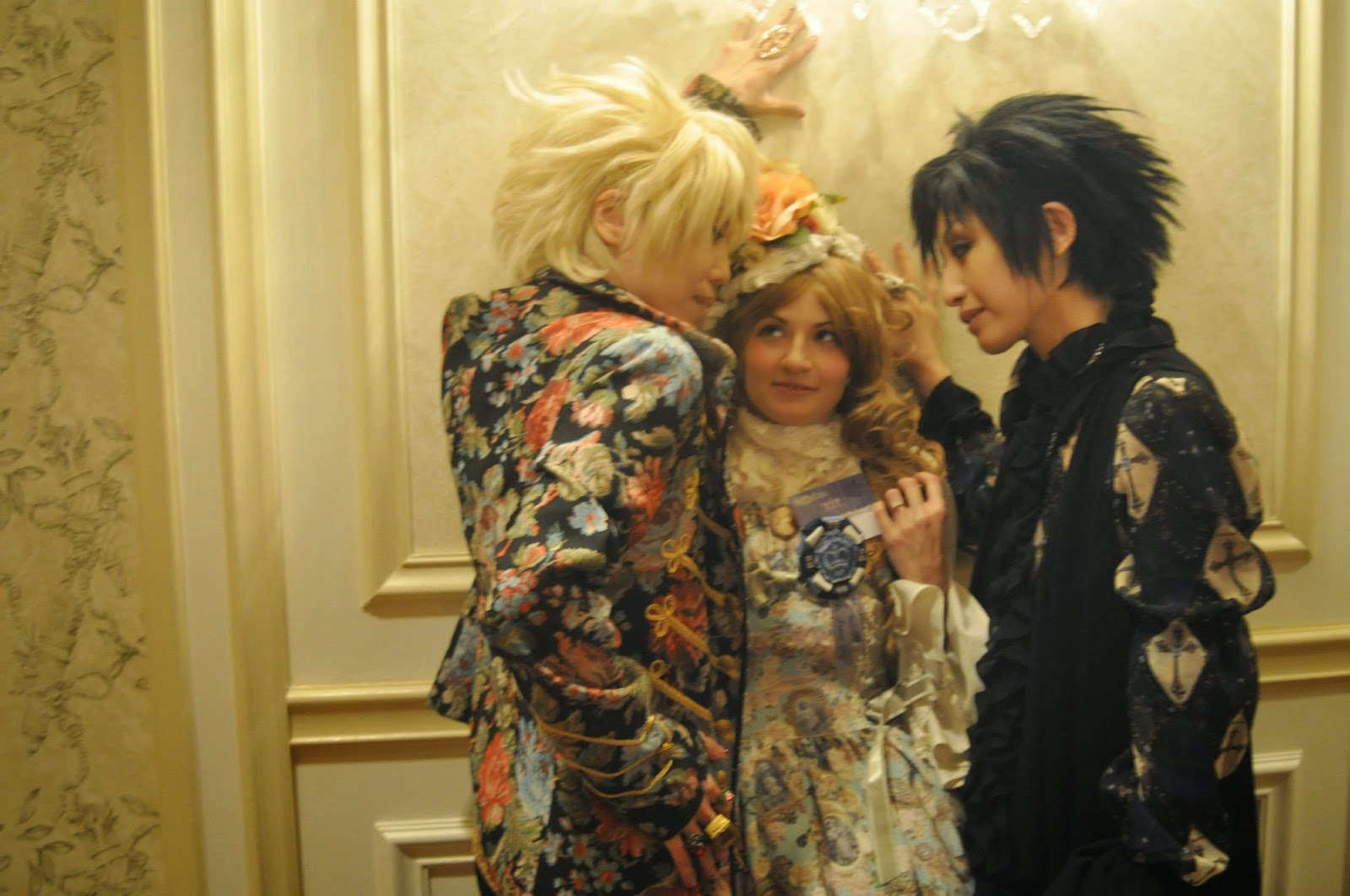 I was certainly not prepared for this at all!

Thank you all for such a wonderful time!

Posted by Madeline Hatter at 1:05 PM No comments:

Email ThisBlogThis!Share to TwitterShare to FacebookShare to Pinterest
Labels: Rufflecon, Things That Happen To You In Lolita
Newer Posts Older Posts Home
Subscribe to: Posts (Atom)