LBC: What Was It Like When You Made Your First Lolita Purchase

With a lot that is happening within Lolita fashion and the international community as a whole - things like Kera moving to digital and our beloved GLB suspending - it has brought me to reflect on things like how I got into lolita. Things like becoming a part of the community, making my first purchases, and finding more to this wonderful frilly world then just the Frills. So I'm taking a glance back on not just my first purchases but what the community was like around that time.

Admittedly, I made my first purchases out on the fringe of the community from two separate sellers on eBay (I know cringe!) but this was back in something like 2007. I was already super paranoid about shopping online and buying from people I didn't know so i tried to uncover as much as I could about ratings and tags. We didn't really have the resources we have now with Lolibrary, nor the now far gone HelloLace, and without understanding LJ yet I had gone it alone, but in the end they were very good purchases. It wasn't until I had paid that I decided to jump into the livejournal community. 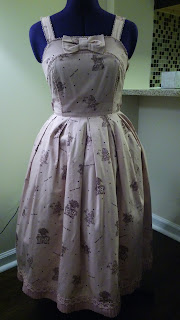 I tried to read as many rules as I could, group descriptions and the like, but there were more things to check out on LJ then. Every few hours someone would create new content and hide it away behind cuts (which I would fail at nearly every turn to work properly!). It was truly hoping on that particular platform and in my nervousness I stayed to the sidelines with maybe a comment here or there and joined as many relavent comma as possible, including the sales comm. 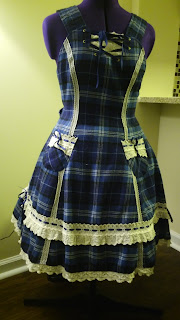 The only thing that was lacking in any way for me during that time was my tiny states home comm. It seemed at the time like I had missed out and I was too nervous to post to see if anyone was still around. Even though I was lucky enough to live near another states comm I had no real way of getting there as I had no car and really spent all my money on brand. So, as I had little options I simply kept watch on the sidelines as a not to rowdy peanut gallery until I mustered up the courage to  post on the old webpage and found a friend to be frilly with.

As for my first purchases, they were easy enough. Since they were both from eBay I knew vaguely how to work it and knew I could get some protection from it. I even made offers on both pieces, which were accepted, and I had super speedy delivery times for both. For some reason I knew more about checking authentication on brand pieces then navigating a community that I only discovered within weeks of each other. To be completely honest though, I would not have changed my experiences very much with the exception of discovering the lolita community earlier on LJ and getting the courage to post sooner.

So this is simply one of a few reactions to this week's topic, I feel good to have even gotten that much out on it and hope you enjoyed my little blurb. If you want to check out more you can see others who participated in the links below but that's it for this week's Lolita Blog Carnival!