LBC: Share 5 Releases From When You First Got Into The Fashion

Oh the nostalgia! This prompt has certainly brought me back to some pretty garments in Lolita fashion history, it doesn't hurt that this one delves into the year I joined in. These are some of the ones I saw being released and took note of due to their high profile from people who really wanted them, got them, and mostly the ones I wanted for myself. My first two Wishlist dresses are on this list and though I couldn't manage to snag them when they first came out I did later on and still find them wonderful (though I would still love the music salon jsk in mint, I have it in black). 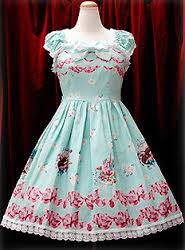 One of the first dresses that ever really called my name and had me hooked to this fashion and was on my Wishlist for the longest time. I did manage to eventually get the op in black but I remember the mint and pink really blowing my mind. I don't think either cut was extremely popular but it pulled me by the heartstrings and played me like the fiddle on it. 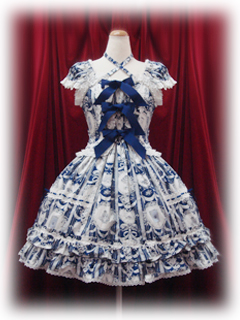 I did and still do enjoy the look of this piece, this screamed that rococo look that I would imagine Momoko meant when she spoke about how Lolita fashion looked. I do remember it being a bit different then what a lot of people were looking for as sweet was reigning supreme but it was so my style even then. (I should have taken the hint that classic and classic-sweet styles were my jam then) hopefully one day I'll pick this one up. 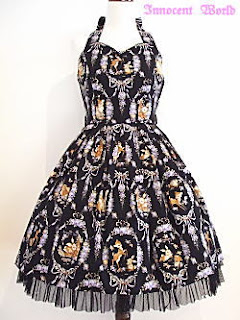 I remember this one in particular because of two main things, it has woodland creatures and they didn't look too cartoony. I remember liking the wreaths around the critters and thinking it was cute but really loving the cut and the ruffle in particular. I don't remember if it was popular or not but I remember a few years ago, around 2014 maybe, that it picked up in popularity a bit. 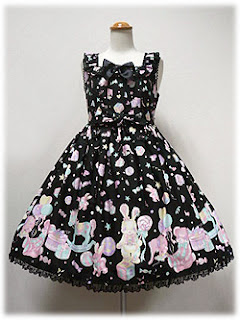 I remember this one so well and I remember being so confused why so many people were going crazy over this print. Sweet really was at a high when I got to by my first piece and I was curious to try but there were some pieces I only thought looked cute on others, this is a prime example and I hope it makes whoever owns these very happy still. 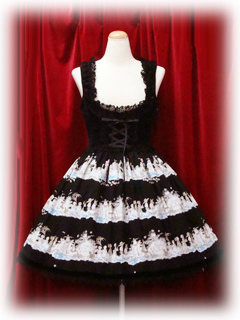 This was the second garment that jumped high onto my Wishlist when I first got into buying and wearing the fashion and eventually bought as well. Again I bought the other cut of the jsk but I really wanted the black at first so at least I managed that, now I also want the cream which is very bizarre from when I first started. I remember a lot of people being confused because it was one of the first real seasonal prints, this hadn't really caused me to rethink my want of it though, it seemed more peculiar that so many people were confused by it.

So that's it for this post from me, I own two of the five though I think I would only really want to get the other Btssb piece on this list I don't have. If you're curious about what others have shared for the year they joined the fashion you can check them out in the links below! 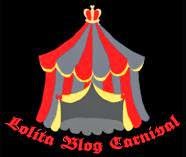 Posted by Madeline Hatter at 10:54 PM